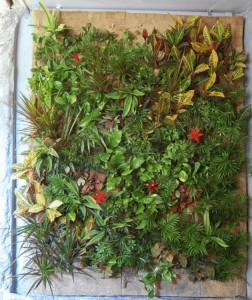 Imagine a wall made with living breathing growing plant materials that not only clean the air but oxygenate it as well.  That’s exactly what has been built at Solaqua.  The green wall was the collaboration of Jody Rael, President of Solaqua, working with two interns, both fifth year architectural students at RPI, Elizabeth Saunier and John Desposito. 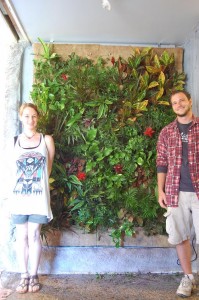 The living green wall at Solaqua is 9 feet high by 7 feet long and was constructed against an ordinary cement block wall with insulating spray foam (to provide a vapor and water barrier). The mechanics work similarly to a fountain; it has a pump which pumps water from a lower reservoir to an upper reservoir where it trickles down to feed the plants hydroponically (without soil). The growing medium is a matted blend of coconut husks that provides a structure that holds the plant in place while allowing the water to pass through providing nutrients to the plant.

Local artist, Carole Clark, chose the plant material and directed the planting.  This is just the first of many green walls for Solaqua.  According to Jody Rael, “The potential for green walls is unlimited.  One of the markets we want to explore is the homeowners market where anyone can grow their own lettuces, herbs and even tomatoes and strawberries in a fraction of the space that normal potted plants would use.”

Reaction to the green wall has been tremendously positive.  “Our front hallway has been transformed from standard to spectacular!”, notes Rael, “Our message of a green, environmentally conscious company is perceived now from the moment you open the front door.”