Did you know that over 3 billion gallons of waste vegetable oil is produced annually in the US? If we could collect all those gallons and use them to replace the energy equivalent of petroleum, almost 1% of conventional US oil consumption could be offset.

This simple bottle of oil packs a lot of energy (about 135,000 Btus per gallon)!

In 2008, Solaqua installed a 500,000 btu waste oil boiler and modified it to burn recycled vegetable oil.  Then, Solaqua created a veggie oil-recycling program which creates a domestically produced clean burning non-petroleum alternative fuel.  The fuel is used to heat our 20,000 carbon neutral building with substantial reductions of pollutants such as carbon monoxide, sulfur oxide and sulfates. 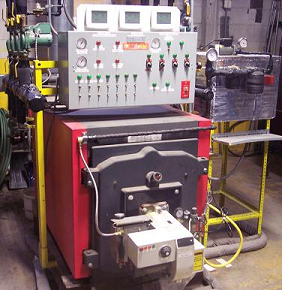 Solaqua picks up the used vegetable oil (yes, the same oil that your french fries are fried in!) from local restaurants in Columbia and Greene counties and expanded into the Capital District in 2012.  Any restaurant that participates in the program receives our Environmental Responsibility and Recycling Award certificate.

By 2011, the program was so successful that we had an excess of oil.  Our next goal was the fleet conversion of Sundog’s installation vehicles.  Jody Rael, President of Solaqua and SunDog Solar, was interviewed by the Discovery Channel in 2012 about the first vehicle in our fleet that was converted to run on recycled vegetable oil.  To see the interview click here!

The Ford F-450 normally runs on diesel fuel but after the conversion (by Sam Merrit of Full Circle Fuels in Hudson, NY) the vehicle run’s on the recycled vegetable oil.  We are in the process of converting the rest of our diesel powered vehicles.

Our first vehicle to be converted to run on used veggie oil!

If you know of a restaurant that would like to be a part of the vegetable oil recycling program, please call us at 518-392-4000 x 105 to be put on the pick up schedule.